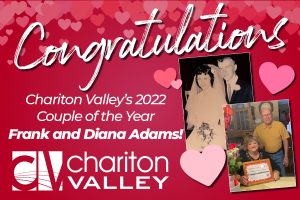 High school sweethearts Frank and Diana Adams met at Bevier High School. Their first date was at a school fundraiser. Frank bid on her meal that was auctioned off and he won. Memories of some of their first dates were going to the drive-in movies, dancing in Bevier, eating out occasionally, and spending time at each other’s homes. Frank and Diana courted for 3 years. They were married. August 7, 1960, on a nice warm day at the Bevier Baptist Church and have been married now for 61 years!

Frank knew Diana was the one. He said, “you just feel it.” I loved her, and she loved me. One memory Frank had about their wedding day was that he could not wait to head to Lake of the Ozarks for their honeymoon.

They have managed to make their marriage work without many tough times. Frank says they’ve been “fortunate and blessed.” He always had a decent job. They had to pinch pennies, but they managed to always make it through. Diana said that celebrating 61 years of marriage feels the same like every other year.  It always feels good. We are lucky to get this far Frank added. Diane said that her secret to their long happy marriage is to just do the best you can, and Frank added that if you love and respect one another, it’s easy and not a struggle.

The advice they have for married couples today is it to pay attention to your spouse, don’t just focus on your phone and make sure you have things in common.

The winning couple received a $100 gift certificate from Ugo’s Pizzaland, the exclusive sponsor of Chariton Valley’s Couple of the Year! Chariton Valley gave a gift basket and flowers to the couple. Thank you to all who participated!

The winning submission is below.

I am honored to nominate my parents, Frank, and Diana Adams, for the Couple of the Year! Mom and Dad have been married for 61 wonderful years. They have five children, eight grandchildren, and nine great-grandchildren. What an inspiration and role model they have been over the years for us all….

From the beginning, our parents taught us that it takes teamwork and compromise to build a lasting relationship. They have supported one another in all aspects of their careers and the raising of their five children. Mom and Dad even owned and operated “Adams Grocery” in Bevier, MO for many years. Mom also opened a fabric store in Macon, MO, while still being available for her family. During Dad’s job promotions and required moves throughout the U.S., the family remained intact and supported the decisions that were best for the family. Time brought them back to Bevier, their true home. The First Baptist Church in Bevier has also helped give them strong roots in the community. Dad has led countless Easter egg hunts for the kids, helped support overseas troops, and served various other leadership roles.

As the years creep up on all of us, health issues start to play a role in how we manage our daily lives and our relationships with those we love. Mom has needed several surgeries, therapies, trips to doctors in Columbia, and around the clock care at various stages over the past several years. Dad has always been there for her; without a single complaint. He truly is a man of God and takes his role as a husband, father, and provider seriously.

Again, I am proud of my parents and honored to nominate Frank and Diana Adams for the 2022 Couple of the Year! (And who doesn’t love a good pizza?!?!)